Ten Years of Dodd-Frank… What’s Next? 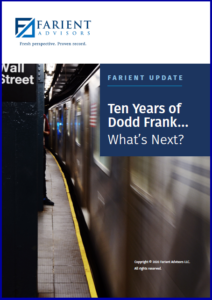 In 2010, President Barack Obama signed the Dodd-Frank Wall Street Reform and Consumer Protection Act (Dodd-Frank) into law making this legislation most comprehensive set of financial rules since Sarbanes Oxley in 2002 and the Glass-Steagall Act of 1933. With 16 major areas of reform, including executive compensation, we asked ourselves, “How did the rules impact executive compensation? “What worked?” “What didn’t? And, “what lies ahead?”

In  “Ten Years of Dodd-Frank… What’s Next?” we explore key aspects of this legislation and how it forever changed the corporate/investor dynamic. We recognize that the sweeping financial rules accomplished some, but not all, of what they set out to do.  While Dodd-Frank attempted to shift power from the C-suite to investors, and on their behalf, the board, the robust economy has created a white hot labor market for executive talent, which in turn, has helped executives retain considerable power. Against this reality, we have the backdrop of social injustice and the ever widening divide between pay at the top and the bottom. Going forward, if we are not careful, this set of circumstances could put us on a collision course toward even more legislation, particularly with a presidential election just around the corner.  This Farient Update provides a deep dive on what lies ahead and the role we all play in better aligning management and shareholder interests.

To download the report, please complete the below form