What Happens When Proxy Advisors Say No To Executive Compensation?

Though non-binding, Say on Pay (SOP) votes can send a clear message to the board and management that shareholders are unhappy with executive compensation practices. ISS and GL, the two most influential proxy advisory firms, may significantly impact a company’s SOP vote with their recommendations. Not surprisingly, with Against recommendations from both ISS and GL increasing, Say on Pay approvals are decreasing. According to Eric Hoffmann, Farient’s Vice President of Information Services:

“Proxy advisors maintain significant influence over SOP voting outcomes. It is important for compensation committees to understand ISS’s and GL’s respective pay for performance models and how their pay programs are measured against them. However, proxy advisor influence, and particularly negative voting recommendations, can be mitigated by proactive engagement with investors.”

While ISS and GL both influence shareholder votes, ISS recommendations have greater impact. Using data obtained from Insightia, this Farient Brief explores the decrease in a company’s SOP vote relative to ISS and GL voting recommendations, and includes SOP votes reported in calendar years 2019, 2020 and 2021. 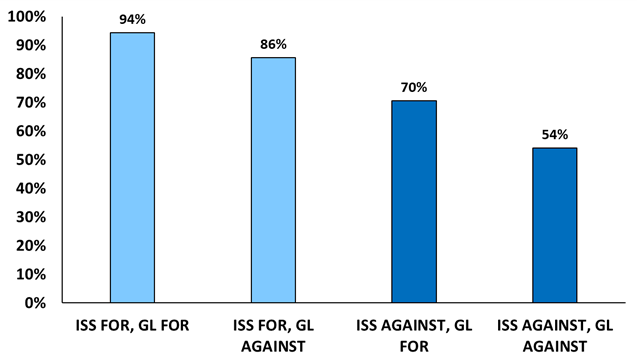 For S&P 500 companies, median support for SOP votes has steadily declined over the past five years, from 95 percent in 2017 to 93 percent in 2021. Individual results, however, are still highly influenced by proxy advisor recommendations. In this group of large cap companies, if both ISS and GL gave For recommendations, the median support was 94 percent. However, median support drops by eight percent to 86 percent if GL recommends Against while ISS maintains its For recommendation. Swapping the recommendations, ISS Against / GL For, median SOP support drops 24 percent to 70 percent, clearly demonstrating the greater influence of ISS on institutional investors. Against recommendations by both proxy advisors are corrosive to investor SOP support. The median SOP vote decreases by a whopping 40 percent to a median of 54 percent, if both proxy advisors recommend Against, clearly highlighting pay for performance alignment issues. With only three percent of companies failing to get majority support of their pay plans during this period, 39 percent of the companies receiving ISS Against / GL Against failed to get majority support for their SOP.

Although SOP support typically decreases about 24 percent with an ISS Against recommendation, the range of voting outcomes can vary widely. For example, in 2021, Chipotle Mexican Grill (CMG) and Kraft Heinz (KHC) both received Against recommendations from ISS and For recommendations from GL. Chipotle received a nearly failing 51 percent shareholder approval for their Say on Pay proposal. Chipotle’s annual incentive plan excluded results from the worst months of the pandemic – March, April and May of 2020 – and paid out the CEO’s bonus at 140 percent of target when it would have been far less if no discretion had been applied. Clearly shareholders were not happy with this decision to retroactively adjust the plan, and it showed in their lack of support for SOP.

On the other end of the spectrum, Kraft Heinz (KHC) received a passing SOP vote of 84 percent approval in 2021 despite an Against recommendation from ISS. Kraft engaged with their investors after receiving 78 percent SOP support in 2020 and proactively took action to fix key issues in their compensation plan. The shareholder outreach appears to have blunted the impact of the ISS Against recommendation.

Family-controlled or closely held companies have more control over their SOP outcome. In 2019, Gap, Inc. (GPS) received Against recommendations from both ISS and GL. Given that the founder’s sons (John, Robert and William Fisher) owned about 48 percent of the company’s stock at the time, the SOP vote passed, receiving 57 percent of shareholder votes, slightly higher than the typical S&P 500 company would expect. In 2021, Gap received an Against recommendation from ISS and a For recommendation from GL. The median vote for this set of recommendations is 70 percent, but the family-owned company received 88 percent approval on their SOP vote.

In 2019, ISS and GL recommended Against Lumen Technologies’ (LUMN) SOP and consequently LUMN received only 41 percent support. In response, Lumen’s board reached out to shareholders. The Chairman of the Board, Compensation Committee and members of management engaged with shareholders to provide an open dialogue on executive compensation and other governance matters. Shareholders cited a lack of CEO pay alignment with company performance, similar metrics used in both STI and LTI plans, and the use of one-time awards as key executive compensation issues. In response, the Committee made significant changes to their incentive program.

Despite the changes to their executive compensation plan, Lumen Technologies received an Against recommendation from ISS, but a For from GL resulting in a 74 percent SOP vote in 2020. Though the outcome improved from the previous year, there were still some key performance alignment issues, likely resulting in the Against recommendation from ISS. The board again engaged with shareholders to better understand their issues with LUMN’s executive compensation practices.

Last year, in their 2021 proxy, LUMN disclosed, “with the feedback of our shareholders in mind, we implemented numerous changes to our 2020 incentive plans.” With even better incentive practices that emphasized pay for performance, LUMN received For recommendations from both ISS and GL. The positive feedback from both proxy advisors garnered Lumen 91 percent support on their SOP vote.

Conclusion: There Is No Substitute For Shareholder Engagement

Proxy advisors hold considerable influence over investor SOP votes. A lack of support by either proxy advisor may have a significant impact on the SOP result of a company. However, all is not lost. Compensation committees and, on occasion, management should proactively engage with their shareholders and explain the thinking around the structure and changes to the executive pay plan. Effective communication, transparency and disclosure can increase investor support and blunt Against recommendations from proxy advisors.

* Insightia uses investor voting policies and voting patterns to predict the ISS and GL recommendations, referring to them as “synthetically” generated. It is these synthetic recommendations that were used for this study.