The disclosure of linkage between executive compensation and financial performance is the thrust of a new pay versus performance disclosure rule approved on Thursday, August 25, by the U.S. Securities and Exchange Commission. In effect for the upcoming 2023 proxy season, the amendment will require companies to show what is paid to a company’s top executives and how that relates to financial performance. The final rules apply to fiscal years that end on or after Dec. 16, 2022, which means companies with a 2022 calendar year-end will need to comply with the new rule.

“The Commission has long recognized the value to investors of information on executive compensation,” said SEC Chair Gary Gensler in a news release. “Today’s rule makes it easier for shareholders to assess a public company’s decision-making with respect to its executive compensation policies. I am pleased that the final rule provides for new, more flexible disclosures that allow companies to describe the performance measures it deems most important when determining what it pays executives.”

The 12-Year Path to How We Got Here

Outside of Say on Pay becoming mandatory for public companies in 2011, the pay versus performance rule is among the most anticipated executive compensation provisions stemming from the Dodd-Frank Wall Street Reform and Consumer Protection Act passed in 2010. It represents the determination of Gensler to take up rules that had been on the agency’s long-term regulatory agenda and had stalled under his predecessor, SEC Chair Jay Clayton.

A draft rule, released in 2015, received pushback from some companies and investors seeking more flexible reporting requirements. Critics of the pay versus performance rule, who expressed their concerns in comment letters to the Commission, alleged that the SEC did not sufficiently analyze the cost implications for companies. Another grievance was that the rule would not produce any major benefits or generate new underlying informational content not already covered in the Compensation Disclosure & Analysis (CD&A) section of the proxy.

The Commission voted 3-2 along party lines in adopting the final rule. In voting against the rule, Republican Commissioner Mark Uyeda said the SEC had failed to update stale data and provide adequate economic analysis while fellow Republican Commissioner Hester Peirce called the rule unnecessarily complicated and costly for companies to implement.

The Final Rule at a Glance

The final rule aims to provide greater transparency and better inform shareholders when voting on executive compensation plans and the election of Board Directors. Specifically, it:

Calculation of Compensation Actually Paid Based on Adjustments to Total Pay from the SCT: 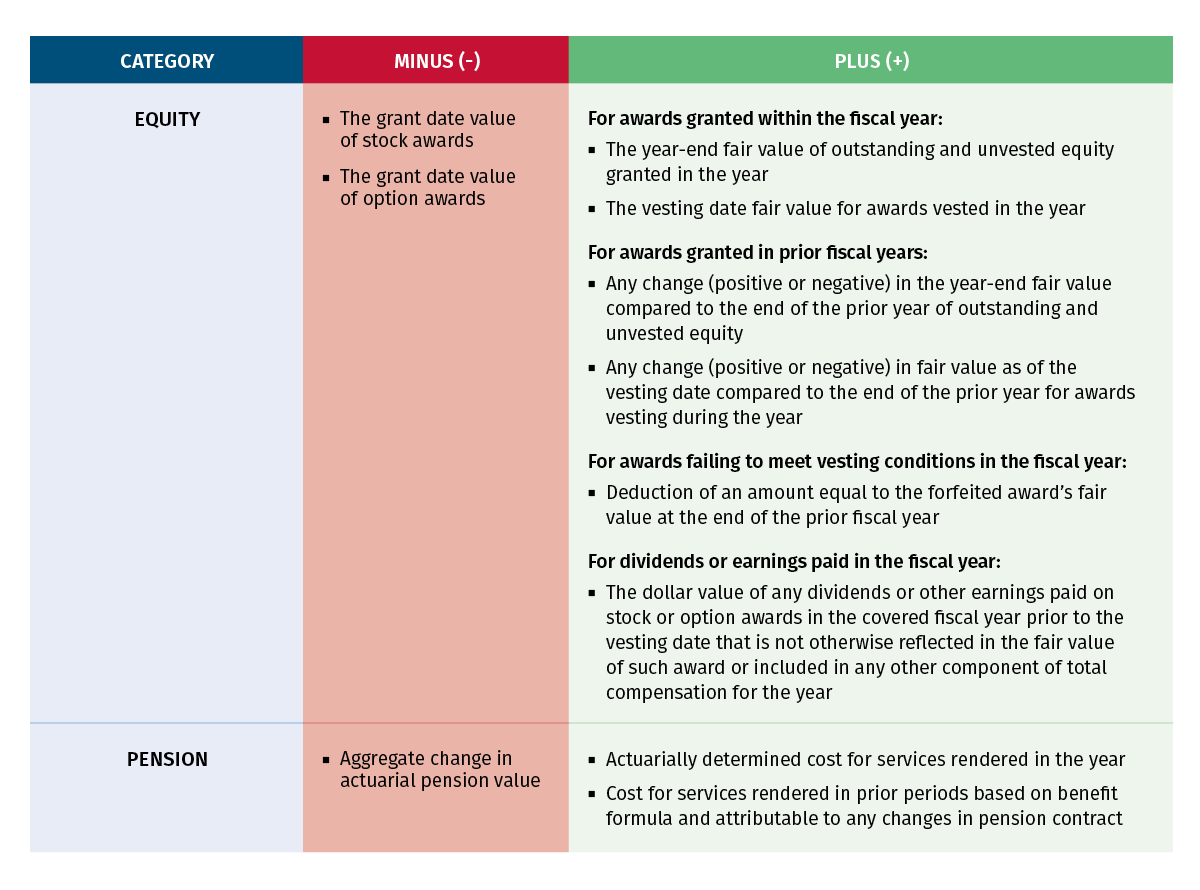 Companies are required to explain in a narrative and/or graphical format the relationship between CEO and NEO pay versus each of the performance metrics in the table as well as the relationship between company TSR and peer TSR. An illustrative example of how a company may show the relationship between CEO compensation actually paid and their company’s TSR is shown below. This type of graph can be repeated for the other relationships between pay and performance measures, and it can be accompanied with narrative text that provides greater explanatory detail. The SEC allows companies to determine how best to display this information, so we can expect there to be wide variability in how companies choose to comply with this part of the rule. 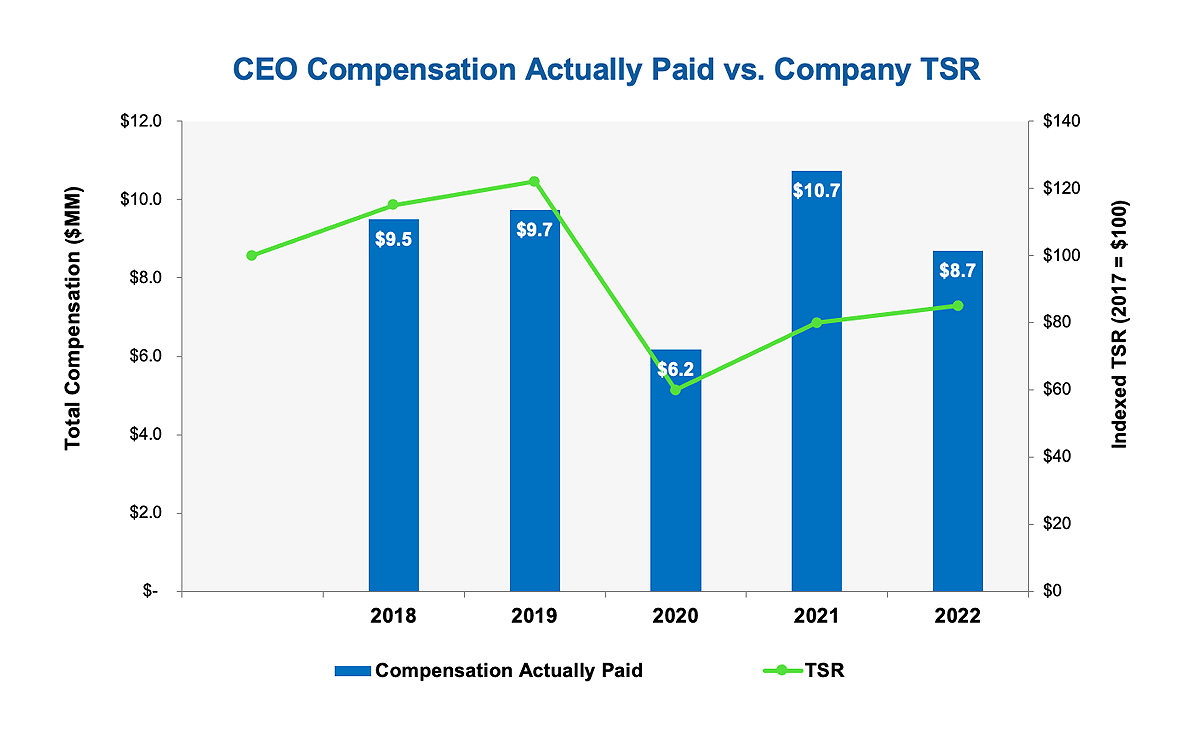 The final rules have the potential to present information that can be misleading or can show an apparent pay versus performance disconnect for the CEO and the other NEOs. In 2015, Farient Advisors submitted comment letters to the SEC that provide feedback on the proposal and summarized ways the rule could mislead investors. Despite changes in the final rule that addresses various concerns from the 2015 proposal, some issues still remain that could distort investors’ view of pay and performance alignment.

For example, compensation actually paid does not align pay and performance time horizons. While the SEC rule includes the value of vested equity and changes in value of granted and outstanding equity over a five-year period, it evaluates pay on a year-over-year basis. A longer calculation of pay that matches with the performance or vesting periods of equity (e.g., three or four years, typically) would better match pay and performance time horizons and help remove the volatility in pay values caused by episodic one-time events. The mismatch present under the final rule will likely create situations in which one-year pay values do not track with performance.

These and other issues can be addressed and clarified by companies through their proxy disclosure. Companies can use the proxy to elaborate on how pay and performance are linked or why certain years of disclosure might be anomalous. Similar to the CEO Pay Ratio rules in which companies augmented required disclosures to provide more color through additional text, data, or graphics, companies will need explore whether additional disclosures may be relevant for them in the context of the new pay versus performance rule.

Now that the SEC rule is final and the 2023 year is fast-approaching, companies and their Boards should consider the following steps:

The Farient Say on Pay Tracker monitors and aggregates Say on Pay results, providing a summary of SOP votes with easy-to-access and easy-to-read tables that contain all companies with SOP votes of <50% and 50-80%.

In The News: Financial Times – US investors rebel against high executive pay