Consider an investment strategy of buying shares in companies that compensated their executives only with time-based equity, i.e., restricted stock or stock options and without performance shares.

Anyone pursuing that strategy over the last decade would have outperformed the S&P 500 by an average of two percent per year without a single year of underperformance.[1] This striking result raises a couple of questions: How can PSUs hurt performance? What should companies do about it?

The Evolution of Equity Awards

Once upon a time, the standard long-term incentive (LTI) plan was comprised grants of stock options that vested over three to five years. Investors believed that equity awards aligned management, getting them to make decisions and  trade-offs in the best interest of shareholders. A flood of research showed that shareholders benefited when management had greater share ownership. This empirical relationship—one of the strongest in the peer-reviewed governance literature—helped drive the growth of stock-based incentive plans over the ensuing decades.

Somewhere in the late-2000s, investor sentiment shifted toward performance-vested equity awards (e.g., PSUs). Critics of time-based vesting argued that management should have to “earn” those equity awards rather than just “show up” over the vesting period. The primary reason for that shift had less to do with the incentive aspect of equity grants and more to do with trying to tamp down the level of CEO pay, of which long-term incentives had become the dominant part. Alongside the “have to earn” idea was a sense that managers at public companies were too short-term in their orientation, and that performance shares could get them to think longer-term.

Prevalence of PSUs Among S&P 500 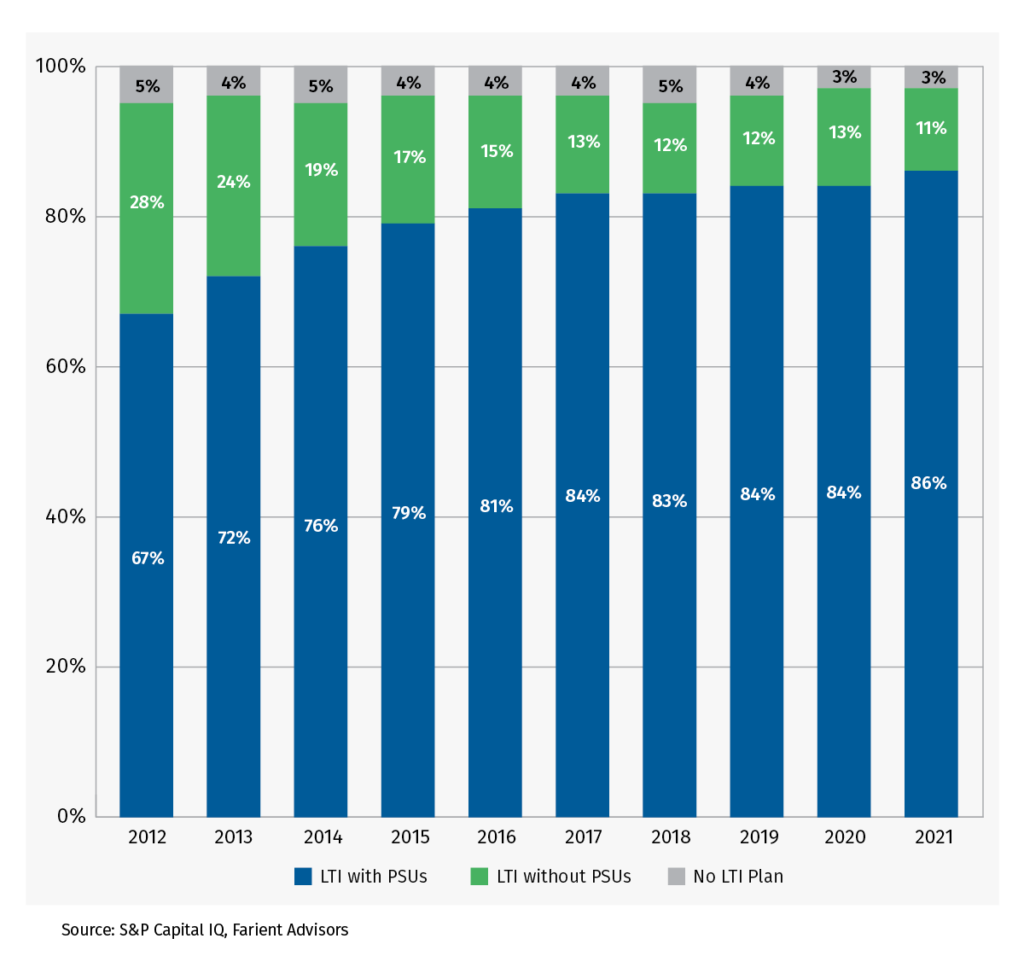 To understand why PSUs can undermine performance, we begin with an unfortunate fact about bonus plans: a visual relationship between managerial bonuses and total shareholder returns (TSR) would resemble a shotgun scatterplot without a discernable trendline. Managers are as likely to receive significant bonuses when shareholder returns are weak as when they are strong. In one-in-eight incentive plan cycles, the companies of executives receiving top-quartile bonuses perform in the bottom quartile of TSR. This lack of alignment is so well-documented that many governance experts have mistakenly come to believe that incentives do not matter.

Incentives do matter. The problem is that every incentive plan includes two sets of incentives:

Incentives are to corporations what drugs are to humans. We want the beneficial central effects to outweigh the harmful side effects. This is much easier said than done. Unfortunately, what the bonus plan scatterplot reveals is that most firms do not develop incentive plans with the same respect for their potential side effects.

Bonus plans have been studied for decades with the salient—if unsurprising—conclusion being that companies literally get what they pay for. Yes, they achieve their revenue, ROIC, EBITDA, or strategic goals that earn them their bonuses. But they also divert focus from the broader, myriad range of activities and behaviors that maximize value, many of which defy measurement. They enhance focus on achieving goals within the performance period with minimal regard for what happens afterward and encourage setting goals that are “achievable” and “not demotivating,” which often (but not always) are code for lack of rigor.

Performance shares bring all the baggage of bonus plans—metric myopia, short-termism, and sandbagging—into the realm of long-term incentives. Many directors believe they can provide sufficient oversight to prevent gaming with metrics and goals. My experience is that managers only rarely engage in obviously counterproductive behavior either in goal setting or in reacting to poorly constructed incentives, but the evidence is clear that when that game is played, management will win.

In principle, performance shares provide management a similar exposure to the ups and downs of the stock price as would a straight equity grant. But performance shares come with significant uncertainty about ownership. Managers will always have a much greater impact on the financial metrics of a PSU plan than on the stock price. If, for example, EPS were a key metric, would management consider a questionable, but accretive acquisition, something that risks eventually shaving a percent or two off shareholder value, to receive 20 percent more shares from their PSU plan? The math and the evidence suggest they might.

Aside from the visibly poor results of performance share plans, they dramatically ramp up the complexity of incentives. This complexity makes it difficult for ordinary executives to relate their decisions and actions to potential payouts. I have often heard such plans described by plan participants as a lottery ticket. If designed right, the payouts may correspond to the investors’ experience, providing some dimension of “alignment,” but may have little incentive effect on the management team.

Should Companies (Continue to) Use PSUs?

Of course, some companies should use PSUs because they are appropriate for their specific situations. Their value-creation goals are unambiguously tied to certain metrics that must be achieved within a prescribed timeframe. I continue to recommend the implementation of performance shares for clients where they make sense.

But PSUs have become the dominant LTI award vehicle not because of their universal utility but because of investor pressure, especially as codified in proxy advisor standards. In other words, “what investors want” in their articulated governance standards is at odds with what investors want as reflected in the prices of stocks that they have bid up or down. As a result of the evidence on PSUs, some investors are backing off the requirement that companies must incorporate PSUs into incentives. But proxy advisors appear to be doubling down on their PSU expectations. About 25% of companies that do not use performance shares get an “Against” recommendation from ISS versus an overall average of 13%, meaning that non-PSU users have double the odds of a negative recommendation and a subsequent hit to their Say-on-Pay votes. Glass Lewis appears to be even less forgiving in their judgment of “non-performance-based” LTI. This puts Boards in a potential bind.

Companies may be able to avoid the worst aspects of performance share plans while conforming to ISS guidelines. One solution is to base PSUs exclusively on TSR or relative TSR. This avoids the problem of metric myopia, and the economics of these plans are a mix of stock-like and option-like risk-reward profiles for management. This type of award is still a three-year plan but being TSR-based eliminates the challenge of goal setting. Overlapping TSR-based plans minimize the benefit of artificially bumping up profits and, presumably, share price since any gains that benefit the current batch of awards increase the hurdle on the next round of awards.

Another alternative is premium options—i.e., stock options with an exercise price higher than the grant date stock price. Exercise price premiums above 15% generally qualify as “performance-based” in ISS’s estimation. While premium options sound riskier for management than standard (i.e., granted “at-the-money”) options, their risk-reward profiles look similar over a ten-year option term, and they do not create significantly more dilution than standard options.

A third alternative is for companies to use milestone achievement plans, e.g., triggering stock awards upon achieving a certain goal whenever that happens. An example is stock awards vesting upon achieving a market cap of $1B. This avoids some of the short-termism inherent in time-limited performance plans, but it places a heavier burden on choosing the right metric(s).

Finally, boards can ignore the proxy advisors and refrain from using PSUs unless there is a special reason for implementing them. They may believe that their companies will perform better without “performance shares” and that robust performance is the best defense against investor wrath.

Some of the most successful companies eschew PSUs specifically because they care more about performance than conformance. Amazon is explicit about why it never used performance shares writing in its 2020 proxy statement Compensation Discussion & Analysis the following:

We do not tie cash or equity compensation to performance goals. A performance goal assumes some level of success by a prescribed measure. But to have a culture that relentlessly pursues invention and is focused on building shareholder value, not just for the current year, but five, ten, or even twenty years from now, we must encourage experimentation and long-term thinking, which, by definition, means we do not know in advance what will work. We do not want employees to focus solely on short-term returns at the expense of long-term growth and innovation.

We recognize that this is a different approach to executive compensation; however, it has worked for us. For example, in 1997, had we adopted performance measures appropriate for a bookseller, we may have inadvertently discouraged our employees from investing their time and energy in initiatives that later became AWS, Kindle, Alexa, and our robust third-party seller business. In addition, in 2019 when we announced and co-founded The Climate Pledge and committed to be net zero carbon across our businesses by 2040, a decade ahead of the Paris Agreement’s goal of 2050, we did not need to adjust or renegotiate performance goals with our employees to reflect that The Climate Pledge introduces new benefits and new costs to our performance over the long term.