The Definitive Book on Pay Performance 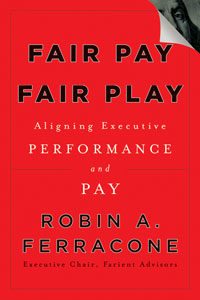 In 2010, Farient Founder and Chief Executive Officer Robin Ferracone wrote the definitive book on aligning pay and performance, “Fair Pay, Fair Play, Aligning Executive Performance and Pay” (Jossey-Bass). Packed with anecdotal stories drawn from more than 30 years of consulting with Fortune 500 companies, this page-turner continues to hold the interest of board members, human resource executives and management, investors, proxy advisors, students and anyone interested in good corporate governance. Aligning pay with performance has taken on a life of its own over the past several years, but as you will see from this compelling reference book, highly paid does not mean overpaid – and we can prove it.

Why did you write this book?

Robin: Companies say their objective is to align pay and performance, but they don’t have adequate tools to measure whether or not they’re doing this. At the same time, investors say they’re concerned less about the absolute levels of executive compensation, and more about the lack of alignment between pay and performance. After 30 years working in the executive compensation consulting business, and being frustrated about the lack of tools for defining and measuring alignment, I set about to ‘crack the code.’ I wanted to develop a definition for alignment, determine the extent to which alignment is an issue, and develop guidance around how alignment can be achieved. Fair Pay, Fair Play provides guidance, within a range of reasonableness, on how much executives should be paid for the performance delivered.

How is your book different than other executive compensation books?

Robin: Historically, other books on compensation are ‘how to’ books. For example, they talk about how to choose peer groups, how to determine target pay levels, how to value stock options and what legal constraints affect executive pay today. These books are helpful, but are more technical and tend to be read by compensation professionals.

Fair Pay, Fair Play discusses a practical way of determining whether pay and performance are sufficiently aligned, and if not, what to do about it. It provides insights from those on the ‘front lines’ who have faced issues of misaligned pay; people like compensation committee members, board members, CEOs, CHROs (i.e., HR executives), investors and proxy advisors.

What are the key takeaways from your book?

Robin: Readers will walk away with convincing proof that the real problem is the alignment between performance and pay, not the absolute levels of executive pay. In addition, they will have a clear understanding of the definition of alignment, and how to determine whether a given company’s pay is aligned or not. Finally, they will develop an understanding of the root causes of misalignment and what to do about it. For example, ad hoc pay decisions that occur outside of the normal pay programs and frequent changes in program design can wreak havoc with alignment.

Who should read your book?

Robin: Anyone interested in the topic of executive compensation might benefit from reading Fair Pay, Fair Play: Aligning Executive Performance and Pay. Those who are charged with setting and administering executive pay levels and programs will find the book especially valuable as I write about the philosophical, strategic, psychological, emotional, practical and particularly challenging aspects of determining pay. Moreover, I provide accounts of people who walk in the shoes of board members, CEOs, CHROs, and investors.

Robin: Enormous bonus payouts in the financial services sector for 2007, followed by the widespread financial meltdown in 2008 and 2009, caused the public to believe that executives generally are egregiously overpaid. Since 2010 we have seen many of the same headlines, but this perception is not always correct. Fair Pay, Fair Play reveals that CEO compensation, adjusted for company size, industry, performance and inflation, has been virtually flat over the last 15 years. In fact, CEOs earning those outlier pay packages are a small minority (approximately 5%) of the population. Most executives are paid well below these eye-popping levels, even though pay and performance often are not aligned.

What are the potential consequences if corporate America fails to fully embrace the idea of aligning executive compensation with performance?

Robin: In 2010 I answered this question as follows: Over the last 10 years, we have seen repeated patterns of how financial disaster leads to a perception of how executive pay caused these failures, or how executives were paid handsomely despite these failures. In turn, this real or perceived excessive executive pay gives corporate America a reputation black eye, which then can lead to new (or threatened) legislation. This legislation often further burdens our free market system with additional taxes and other frictional costs being levied. Today, in 2016 I would say that we are at a boiling point. Executive pay is once again in the headlines and “main street’s” anger is reflected in the rise of poltical outliers like Bernie Sanders and Donald Trump. We have the perfect storm of people who feel marginalized, economic volatility, and the perception of excessive executive pay.

To this day, six year’s after it’s initial publication, Fair Pay, Fair Play gives powerful guidance on what levels of pay are appropriate for the performance delivered. If this guidance is followed, we can avoid the ‘heat and light’ from perceived excessive pay, and may be able to avoid the increased frictional costs of greater government intervention. My view is that such convergence can potentially lead to a better economic result overall.