News stories about executive compensation abound as this proxy season reaches its crescendo, with such claims as “Executive Pay Is Too High,” Performance Goals Are Too Easy,” and “Executive Compensation Continues to Escalate.”  Now, as the 2014 proxy data are flowing in, total CEO pay appears to be on the decline. Or is it?

With the first four months of 2014 behind us, company filings for the Russell 3000 indicate that Total Direct Compensation (TDC, i.e., the value of salary, bonus, and long-term incentives as reported in the Summary Compensation Table (SCT)) is up, but Total Compensation (i.e., TDC plus pensions and all other compensation) is down.  This is because pension accruals are coming down, largely due to the fact that interest rates, a key component in pension accrual calculations, are starting to rise.  When interest rates rise, pension accruals go down, all other things being equal, because the funding of defined pension obligations can come down if those funds appreciate are expected to appreciate at higher rates.  The reverse was true when interest rates were coming down.  This phenomenon, of course, is independent of compensation committee decisions and executive performance.  Among the Russell 3000 companies filing 2014 proxies to date, the average pension change has declined to $656,000 in 2013 from $1.3MM in 2012.  This change in value has significant implications for those investors who use Total Compensation from the SCT as a measure of pay.

When comparing the change in pay year over year or measuring pay for performance, it is important to be aware of pension value changes that are driven by changes in interest rates.  Furthermore, it underscores the need to determine “normalized” pension accruals over time before conclusions can be drawn about the reasonableness of compensation.  Some notable examples include:

Wells Fargo (WFC) – showed a year over year decline in reported CEO Total Compensation in its SCT of $3.6MM (from $22.9MM in 2012 to $19.3MM in 2013).  With no other significant changes in pay, this decline was exclusively driven by the difference in pension accruals.

Honeywell International (HON) – where the difference in CEO pension accruals obscured an increase in compensation (i.e., Total Compensation less pension change and other compensation).  HON reported a decline in Total Compensation in the SCT of $7.2MM (from $33.2MM in 2012 to $26MM in 2013).  This decline was driven by the difference in pension accruals from $17MM in 2012 to $532,000 in 2013.  This more than offset an increase in TDC of $9MM, driven exclusively by HON’s 2013 annual cash incentive payment.

Through Q1 of 2014, we have seen companies take different approaches to reporting this drop in pension accrual and apparent decline in CEO pay.  In response to the significant change in pension values and their impact on the SCT, companies have responded in a variety of ways including:

For example, Coca Cola (KO) combined two of the approaches above. They now provide stakeholders with a clear and transparent look at CEO Total Compensation.  In its 2014 proxy, KO shows the effect that the year-over-year change in pension value has on Total Compensation, as determined under applicable SEC rules by adding a column to the SCT.  KO highlighted the fact that the amounts reported in the “Total Without Change in Pension Value” column may differ substantially from the amounts reported in the “Total” column required under SEC rules and are not a substitute for Total Compensation.  KO also analyzed CEO pay using different definitions of pay, all of which excluded the impact of pension change.

As proxy season 2014 peaks, I encourage all who use the proxy for comparing year over year compensation to consider interest rate-driven pension changes, and when measuring Pay for Performance Alignment, to look at alternative definitions of pay, like Farient Advisors’ Performance Adjusted Compensation (PAC), which averages year over year fluctuations. 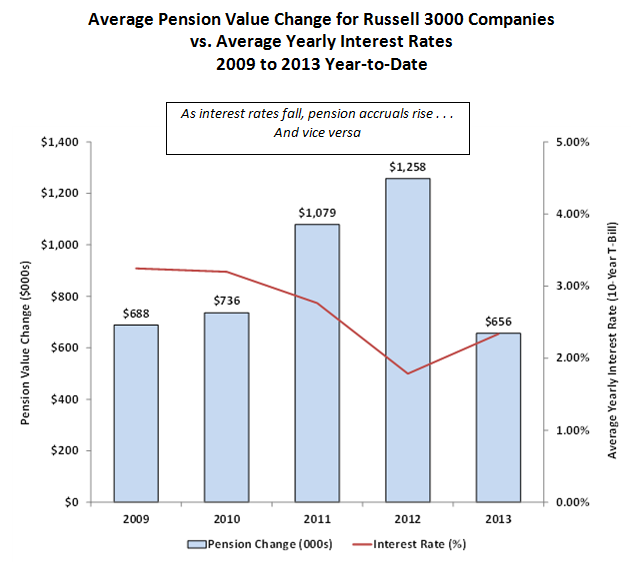 This article originally appeared on Forbes.com.